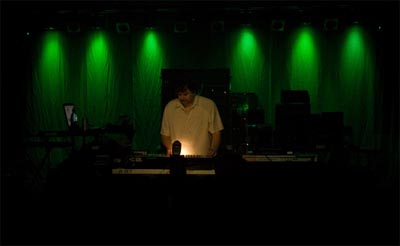 John Christian is a UK based electronic musician. Since 1995 he has been a member of airsculpture who play improvised electronica broadly in the "Berlin School" style. Indeed airsculpture were at the heart of the resurgence of this style along with groups such as radio massacre international and redshift. Not limited to retreads of the '70s Berlin sound, the band have established a distinctive style based around powerful sequencing, expressive melodic improvisations, deep space ambience and always real hands-on performances.

As a solo artist, John's music inevitably has a lot in common with his work with AirSculpture but presents more composed, structured soundscapes. Many tracks have layers of sequences that mesh in a complex fashion that is hard to achieve within the improvised band framework. 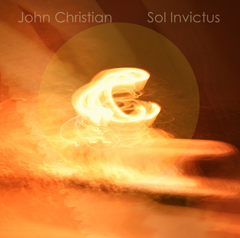 Sol Invictus is a collection of tracks that have developed over the course of several years. Following the brooding ambience of Dark Matters, this is a much brighter collection. Five long tracks (between 7 and 24 minutes) feature slowly developing, multi layered sequences, sprinkled with electronic sound effects and textures.

Working (OK, playing) by myself in my studio allows me to explore different musical territories that wouldn't work in the band context with airsculpture. Here the tracks are much more carefully constructed. The common thread is a base of dense multi-layered sequences that shift and blend, sometimes imperceptibly. Antiquark (from the Susbarbatus album) was the first example of this approach; here it is applied to varied tracks with distinct feels, sometimes with sequences running in isolation, sometimes as a bed for played parts.

Sol Invictus is available as a CD presented in a mini LP style sleeve, or as a digital download. See where to buy below.

Dark Matters is a very different recording to Susbarbatus or Bohunt Sabotage. It is an exploration of deep, dark ambient drone music.

There are no tunes here, and nothing rhythmic. Just pools of dense atmopshere, slowly evolving. It is music for contemplation and listening in the dark. It won't be for everyone, but you can use the player on the right to see if it works for you.

Dark Matters is only available as a digital download, from Bandcamp.

Susbarbatus is a self-released 6 track album. The first two tracks (Los Ashes and the title track) are based on the material on Bohunt Sabotage, but in much improved versions. Brane Storm delves into deep space ambient teritory. After the delicate melodic Forest of Weaver's Beams we return to the Bohunt material with a live recording of Mangrove from the HJ5 set. Finally Antiquark is a complex multi-layered sequencer excursion reminiscent of modern minimalist compositions.

Susbarbatus available as a CD or a digital download, from Bandcamp. You can use the embedded player to preview or buy the album.
Alternatively the following outlets may have stocks: Synth Music Direct (UK) | Groove Unlimited (NL) | Cue Records (DE) | Ricochet Dream (USA)

Plied with beer, John agreed to play a solo concert at Hampshire Jam 5. Bohunt Sabotage is a recording taken from the rehearsals for that concert which was made available as a home produced CDR to give the HJ audience something to take away with them. The set was built around preset sequences but the development and improvised played lines are completely different to the live performance.

The recording is a single take, and is a little rough in places but is a good representation of the HJ set. One section, Los Ashes went especially arwy so has been added as a "do-over" track. This same piece, further developed, forms the first section of the track of the same name on Susbarbatus.

A new download-only version has been released in 2014. As well as the version of the Bohunt set as released on the original CDR this includes nearly 2 hours of additional bonus material: The Hampshire Jam live performance, and another slightly shorter and sometimes quite different version. The variations in these different takes on the same material demonstrate the boundaries between preparation and improvisation.

Bohunt was released as a numbered limited edition of 100 CDRs, which is no longer available. The extended re-issue can be previewed and purchased at Bandcamp.

John's first published solo work was "Heathkit Interociter", which appeared on this compilation album produced by the members of the Beyond EM mailing list. It was a painful gestation; after a few years of working with airsculpture the old conventional home studio was no more and all the effort seemed to be going into producing a working recording environment rather than producing music. Happily a software update was finally stable for long enough to put this track together. The end result is a quirky sequencer driven track that in some ways gives a hint of what is to come.

Digital downloads and CDs can be bought directly from bandcamp